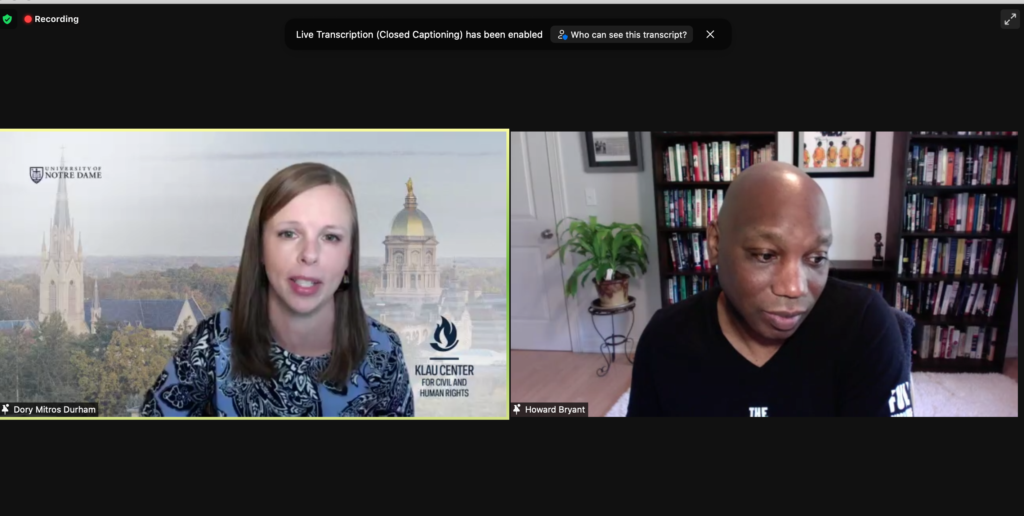 The Klau Center for Civil and Human Rights hosted sports reporter Howard Bryant, who spoke about the legacy of sporting events for his online lecture series, “Building an anti-racist vocabulary” to Friday.

The series is directed by Dory Mitros Durham, associate director of the Klau Center and head of the Keough School of Global Affairs’s Racial Justice Initiative, in response to acts of police brutality against George Floyd, Ahmaud Arbery and Breonna Taylor in 2020.

The program objective is to provide “to the students, faculty, staff and alumni of the University of Notre-Dame a critical and sustained engagement on interdisciplinary topics related to the understanding of systematic racism and engagement in the daily work of fight against racism”.

Bryant is an author, sports reporter, senior writer and columnist for ESPN. He is also a sports correspondent for The Sports Reporters talk show with ESPN and for Weekend Edition with NPR. He has written five books including “The Heritage: Black Athletes, a Divided America, and the Politics of Patriotism” and “Full Dissidence: Notes from an Uneven Playing Field”.

Bryant began the conference by discussing the history of politics in sports. He noted that it dates back to the 1936 Olympics, where black sprinters like Jesse Owens and Mack Robinson “denounced the idea of ​​white superiority which was obviously what Hitler was pushing.” Bryant referred to this as “the start of what I call ‘The Heritage’,” which Bryant explained as a tradition of athletes using sport as an arena to make a political statement.

Noting that the impact of sport on politics was “obvious,“ Bryant noted that a problem arose when “black athletes themselves took the agency” to talk about racial injustice.

Bryant went on to explain how Tommie Smith and John Carlos sacrificed their careers at the 1968 Olympics for raising their fists in the air on the Olympic podium in black solidarity.

“The fact that the Olympic Committee voted on Tommie Smith and John Carlos, just for that gesture, for the simple expression, tell you how much that meant,“ he said.

Bryant asked the audience, “Why did we build a dynamic where you risk everything just to support black people?”

Despite this legacy of protest, some sports fans do not want to see politics during games. Bryant says there is no difference between the protest we see shown by black athletes and the patriotism we see on the pitch. After September 11, Bryant says patriotism was brought “into the stadium full time.” He asked why people don’t treat playing the national anthem “like it’s not political”.

Bryant thinks America pitted patriotism and protest against each other. Colin Kaepernick kneeling during the hymn should not be seen as disrespectful to the flag or unpatriotic, he said. He argues that people should not view protest as unpatriotic, but as a by-product of patriotism.

He expands on this question by exploring the activism that people see in sports today. He asks, “What happens when the protester becomes power?” Howard doesn’t think we should attribute their individual wealth – like Lebron James’ net worth of $ 50 million – to actual activism.

“The athletes are reaching a point where they represent what they were protesting five years ago,” he said. Athletes are now the people in the boardrooms who make decisions about sports teams.

Bryant questioned the future of sports activism, asking “Are athletes using their power for collective action or are they just building their fortunes and empire?” He urged athletes to focus on the big picture rather than themselves.

Anyone interested in learning more about upcoming speakers in the “Building an Anti-Racist Vocabulary” lecture series can register online at Klau Center website.