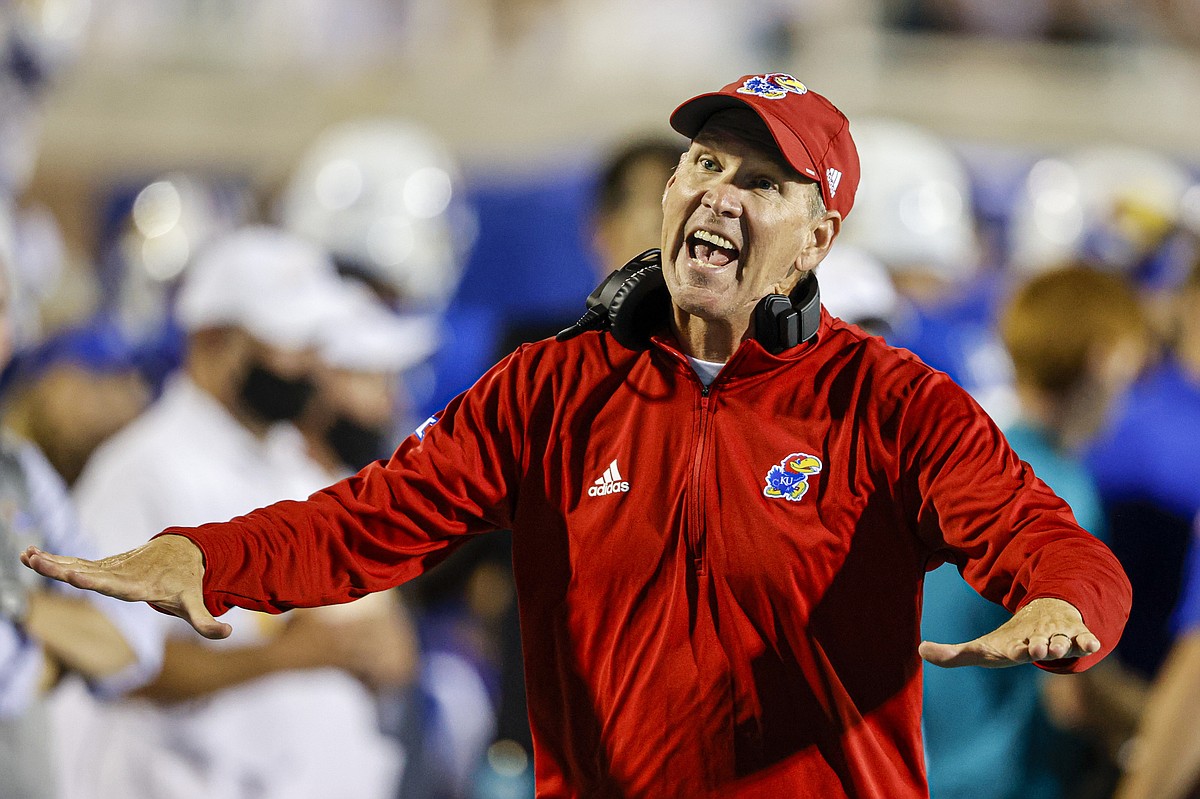 Kansas coach Lance Leipold yells at an official as the team plays against Coastal Carolina during the second half of an NCAA college football game in Conway, SC on Friday, September 10, 2021 Coastal Carolina won 49-22. (AP Photo / Nell Redmond)

As his Kansas football team prepares for their opening Big 12 game this week, head coach Lance Leipold believes some special teams mistakes following the Jayhawks’ loss to Coastal Carolina in Week 2 are repairable.

Few games in Friday night’s loss to Conway, SC stood out as much as a KU punt that the Chanticleers not only blocked, but also turned into a special teams touchdown. with a recovery in the end zone.

Coastal safety Alex Spillum ran unscathed from the line of scrimmage to punter Reis Vernon, hit his punt into the air, then jumped on the loose ball in the end zone, turning a game from one score to a 21-9 CCU advantage near the middle of the second quarter.

Leipold said in his weekly press conference on Monday, ahead of KU’s Saturday home game against Baylor (2:30 p.m., ESPN +), that there had been a punt protection check and a player had made an assignment error.

“We let a guy break free, let go of a guy who was in a good position to make it happen,” Leipold said of Spillum. “It’s correctable,” added the coach.

The Jayhawks also incurred a late-game penalty just before the critical special teams blunder. Leipold, reiterating what he said on Friday night after the 49-22 loss, said the penalty was his fault as he was hoping to run a few extra seconds before the punt. When a check had to be made, the punt team could not get back into place to retrieve the punt before the end of play time.

“These are two separate issues, but it seems like everything is connected. We have to do a better job, ”said Leipold.

The game marked the second time at CCU that the Jayhawks (1-1) got a blocked kick on special teams. The first instance came at the end of the first trimester. After running back Devin Neal’s short touchdown gave KU the advantage, 9-7, the margin did not turn 10-7 as expected.

CCU senior in red shirt Jeffrey Gunter was already in the backfield when he skied up to crush Jacob Borcila’s extra point attempt. To get there, Gunter first passed long snapper Luke Hosford and offensive lineman Joseph Gilbertson once the ball was snapped.

Leipold said the Jayhawks had some “operational communications” in this case.

“More importantly, the problem was just technical of getting too low and creating a gap,” said the coach. “We need to protect the gaps a little bit more and stay bigger. I think we will solve this problem as well.

Although it ended up being canceled by a penalty, the Jayhawks had another blocked kick – this time on a long field goal – in the third quarter.

Trying to reduce the CCU’s lead to 10 with more than four minutes to go in the third quarter, KU sent Borcila onto the field for a 56-yard field goal attempt. The pressure wasn’t coming from the middle like it had on the blocked extra point earlier, but Spillum rushed over the edge to get his hands on the kick.

CCU cornerback Jacob Proche lined up in the neutral zone, shooting a flag that erased the blocked kick from the record books. But it was another case of the KU special teams breakdown, as tight end Trevor Kardell tried to block both Spillum and Proche.

KU’s field goal team were successful in their first appearance of the night at CCU, when Borcila capped the opening drive with a 46-yard field goal. Borcila also sent an extra point in the amounts on his only other try following a KU TD.

The Jayhawks attempted just two punts in the road loss, both in the second quarter. The one Vernon had time to get down has walked 38 meters.

Leipold called Coastal’s blocked punt and TD a “huge change in momentum” in the loss, his first as a KU head coach.

“We lost by 27 points and we kicked twice and we didn’t return the ball,” said Leipold of the strange combination of events. “Think about it. I don’t know if I’ve been part of a game like this before.