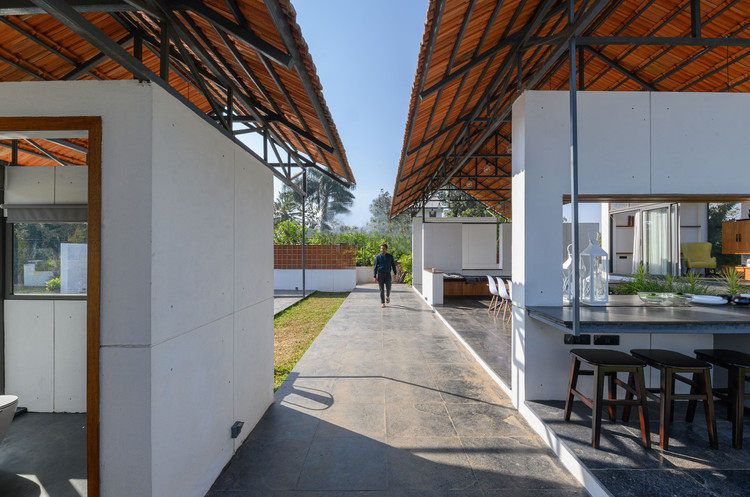 Text description provided by the architects. A family of doctors wanted a weekend getaway to design on their ancestral farmland located in the village of Terni. The idea was to take advantage of outdoor spaces around a swimming pool nestled between sugar cane fields and mango orchards. The profile was to design a place that gives users the feeling of inhabiting between farmland, less with themselves and more with the fauna and flora of the site.

The journey to farmland from the city takes you through a series of villages in Karnataka and Maharashtra, casting impressions on the local villages which have a strong character of rural material palette and simplicity in architectural style bringing a feeling rootedness and humility in the lifestyle, a contrast with city life. Customers were keen to have a slice of that country palette for their weekend getaway. And, as architects, we had our contemporary vision.

Like all village houses in this region, this part of the built form is essentially divided into three main spaces. One, dedicated to daytime activities such as lounging, eating, cooking and entertaining. A second space flanking along the pool and deck houses the bathroom and toilet. Finally, a raised space is positioned just in front of these spaces for a good night’s sleep. Unlike a typical village house housed under a single gabled roof, each of these spaces is sheltered by its own independent gabled roof. Thus, the resulting image of the silhouette of the roof is reminiscent of neighboring villages.

These three units are spaced apart so that the cantilevered gables of each roof slope down into buffer zones that form softscape and hardscape courtyards. The plinths and roofs of these three built spaces cascade down to the east allowing all spaces to view and enjoy the pool, also adding the benefits of blocking south and west glare and cross rains while orienting users towards a softer light on the east and north.

The house scatters in a compound boundary right in the middle of the fields only to protect its users from unknown wildlife. Approaching from the east, a large lawn extends around the swimming pool. The pool connects the house to the west end. One can walk barefoot to the house along the pool on the stone terraces or walk along the terracotta jali walls over the landscape. The architectural spaces are built around the central living pavilion. The main living pavilion serves as a bedroom and pool deck on either side, creating a variety of functional spaces.

The bedroom is independently placed on a top plinth with sliding aluminum windows that open the bedroom to the landscape. A slim slit window is open to the west which frames the mountains far across farmland, also framing a spectacular sunset view. When one settles comfortably on the bed, the only framed views are open to the sky gardens, the light is reflecting the swimming pool and the sunny terracotta tiled roofs of the other two stepped volumes. This bedroom also dialogues with the living pavilion through a thick garden courtyard visually enlarging the volume.

The material play of this project finds a balance between vernacular tones and contemporary hues bringing both warmth and elegant attitudes. The warmth of the earthen browns and blacks is achieved by using clay tiles for the roof, hollow wire-cut mud bricks for the jali walls and treated kadappa stone floors. The balance of modernity was marked by steel trusses, freestanding white walls and luxury ceramic pool tiles.

The impact of this location was to create a different pace for the user, where they could be absorbed in the calm and openness of farm life. The immediate farms of this farmhouse change in character with the seasons from barren land ready to be plowed to tall grass of fully harvested sugar cane adding to the change in quality of built form and image of the place.

A twin swing hangs from one of the beams with the pool, leaving a swing above the waters, creating an unusual experience. Just across this corner, a breakfast table hangs from the roof truss, allowing it to float. The central pavilion houses the living room and dining room as a single space with openings on each wall that serves as a pantry at one end and a seat at the other. The whole built form is arranged as a system of interlocking pavilions, connected to each other by open corridors, independent walls and gardens. This project is choreographed to create open, fluid movement in the wall and floor elements beneath a series of floating steel truss gable roofs.

The open plan adds to the dynamic nature of the space allowing the venue to be used according to season, time and occasion. Minimal teak wood joinery units are sprinkled across the design just enough to store the essentials for a weekend. The play of shadow and light is purchased by the positioning of the independent walls and the roofs which form the courtyards. When walking through these spaces, the walls and openings are designed to create a juxtaposed view from farmland to the architecture itself, recalling the power of nature and architecture.

A burned farm during a PVFD training exercise on Saturday

A stunning Northamptonshire farmhouse with swimming pool and cinema room has been added to the market. The 1850s five-bed house in Boughton has been modernized and extended, but retains many original features. High ceilings, exposed brickwork, wood burning stoves and an aga make the house pleasing to the eye. There is also an office and […]