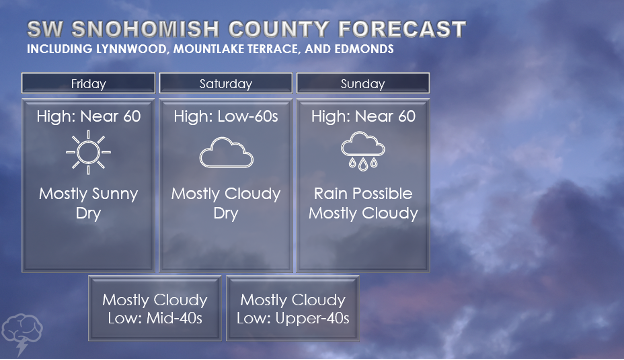 Under the weather: Cooler but above all dry temperatures for the first weekend of October

Well, that’s been a week of soaking, hasn’t it? As of this writing, it is also raining outside. And I absolutely adore it.

Here is a graph showing the amount of rain over the past week. Not counting the rain on a Thursday, we have already seen about 1.5 inches of rain over a four day period. And that amount will likely exceed 2 inches once we include Thursday’s final totals. 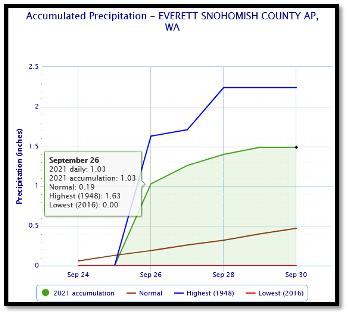 It’s been a rainy week, but since September is almost over (or over, depending on when you’re reading this), let’s take a look at the month as a whole.

As you can see in the image below, the second half of the month or so saw most of the rain, with two peaks predominant in the graph. Our highest daily total was 1.03 inches, which happened last Sunday (26). Normally we see 1.68 inches of rain during the month, but until the 29th we have seen over 3 inches. In fact, looking at preliminary data from Thursday, we should set a new monthly precipitation record, surpassing the previous record of 3.52 inches set in 2010. 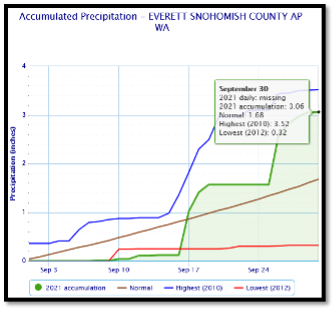 As we prepare for October (already ?!), we expect a respite from the rain for the first few days as a low upper ridge of high pressure develops over the area. Mornings are likely to be fairly cool, with temperatures plunging into the 40’s. With high pressure and cooler temperatures, especially after a humid week, morning fog becomes a potential problem. During my internship at KOMO News, I wrote an article about fog, which can be read here. This article focuses on the differences between Olympia and Seattle when it comes to fog, but it can be helpful in knowing why fog forms. If you’re planning on driving and encountering fog, here are some tips, courtesy of the National Weather Service:

Friday is expected to be the best day, with mostly sunny skies. Temperatures won’t necessarily be warm, however, as highs are expected to be around 60. Clouds are expected to return on Saturday before small disturbances approach the area. A chance for rain is returning Saturday night into Sunday, but if we see anything it should be light.

Looking ahead to next week, Monday should be dry again. After that, however, a more organized system has the potential to impact us Tuesday through Wednesday. We’re still a long way from that, so be sure to pay attention to the up-to-date forecast to see how this storm could affect you.

Some people may be tempted to say, “Again? Regarding the rain that seems to keep coming. Well, I hate to tell you this, but we’re quickly approaching our wettest time of year (November is statistically our wettest month of the year) – you might want to start getting used to it now. After the dry summer, however, hopefully the rain will be welcome for most.

Have a good week-end.

Kelsie Nelson is a meteorologist and recently graduated from the University of Washington who grew up in Lynnwood and now lives in Kenmore. After writing weather blogs as a KOMO News intern, she discovered a passion for writing about the weather. You can read more on her blog www.wxnoggin.com and you can also follow her on Twitter at @ kels_wx3.